Why Parents should stop on court and off court coaching?

Posted by BadmintonScholar on Sun Dec 27 2020 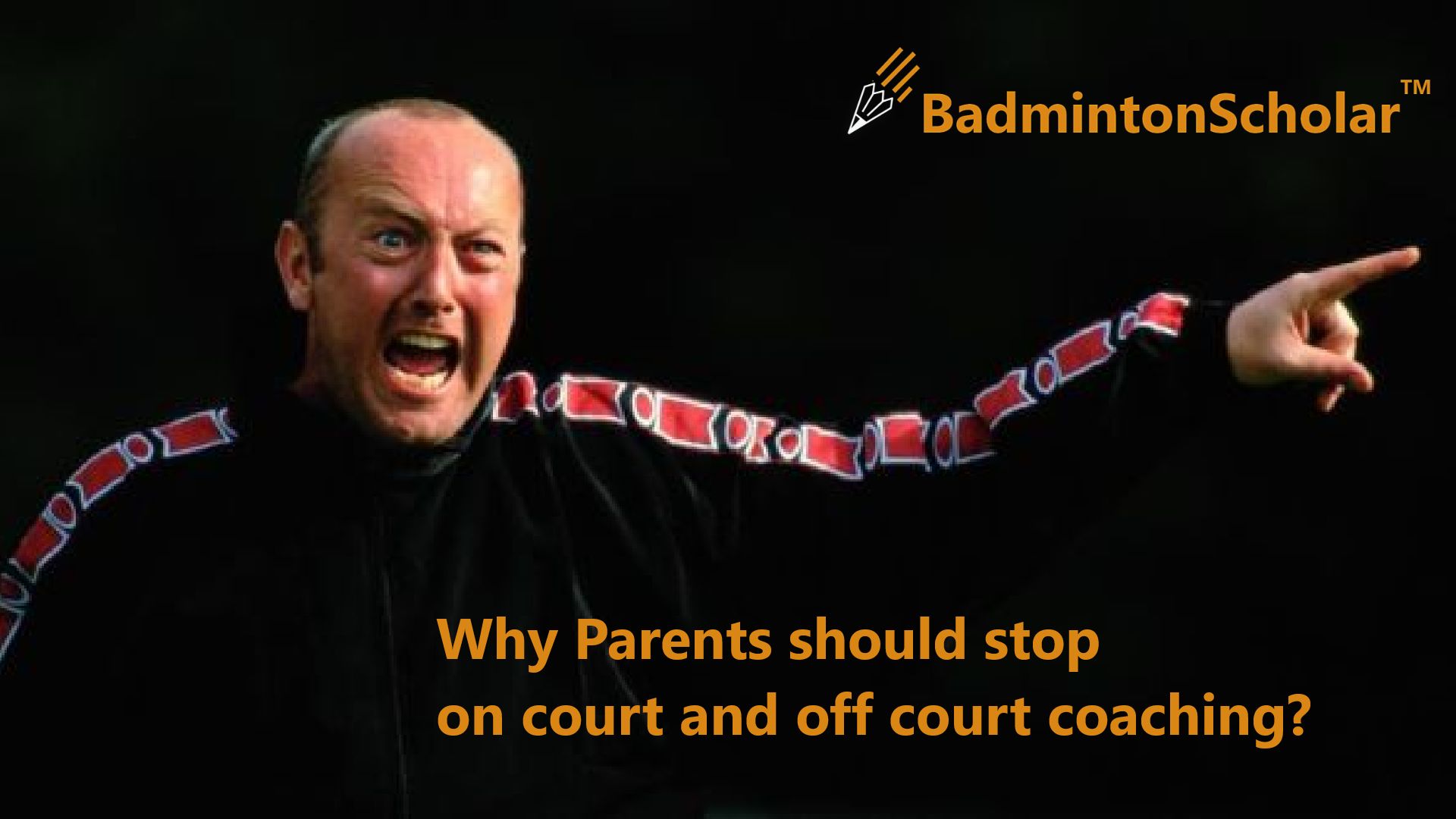 "Choose the better coach available to you…Choice is yours. Sit back, enjoy the game, and let the coaches do the coaching. And remember...Your kids aren’t going to be playing badminton as kid forever."

Why Parents should stop on court and off court coaching? Badminton is growing faster and more budding players are choosing badminton as their career choice. It is important phase where we have to discuss about the role of badminton parents.

Usually Player(s) have a chief coach and coaches who are being on court during tournament. But it turns out this isn't always true on most young Badminton Players.

Usually parents are supporting their kids off court lot during their recovery, leisure family time and more. This support may be an additional session with kids, suggesting corrections in strokes & footwork, motivation & encouragement talks and more. Unfortunately, most of the above are the responsibilities of the coach, not Parents. Parents are not eligible or responsible to do these.

The 90% parents are who have tagged themselves with an assistant coach role and now feel the need to shout out their own instructions to the players on and off the court.

Understand and Respect the Parent Role

There are four main roles at every badminton game:

Every person who attends a game can fill only one of these four roles.

• If you're the coach, you coach your player.

• If you're a player, you play the game.

• If you're a referee, you officiate the game.

• If you're a spectator, you watch the game.

Sounds pretty simple, doesn't it? It's incredibly important that every person who attends a badminton game understands and respects the role that they’re required to play throughout the game.

Some parents will assume that because they were playing badminton with knowledge or are players in past and they have the right to coach or assist during their daughter's / son’s game.

But, the answer is Nope. Your Coaching and Playing Experience are Irrelevant. Unfortunately, some adults feel entitled to voice their opinion if they have previously coached or played at a high level. But previous badminton experience doesn't change your role. You're still a spectator even if you were good enough to play district or State Badminton tournaments 15 years ago...

You're still a spectator even if your daughter's coach doesn't have the same level of coaching experience as you do...

You're still a spectator even if you claim to 'have been around badminton for 40 years and you know what you're talking about'...

Parents must understand this:

If you're not the Player's coach during the current game, you still have no right to do on court coaching.

The reasons why parents on and off coaching is hurting young badminton players.

Before the tournament and during tournaments, the coach will talk to the player about strategy and may give specific instructions to the players for the best chance of success.

And then as soon as a player gets out on the court, parents start screaming out conflicting instructions that go against the Coaches' strategy and the player's role on the match play.

This leaves the child in a tricky situation...

• Who should they listen to? Coach or Parent?

• Which adult do they choose to make happy? Coach or Parent?

• Which adult do they choose to disappoint? Coach or Parent?

Players are forced to choose.

And since they don't want to get yelled at on the car ride home, most players will listen to their parents and go against the Coach's strategy. This will lead to poor player performance and could even lead to the player receiving less time on the court.

Learning how to make smart badminton decisions through experience is crucial for badminton skill development.

To give specific examples of badminton decision making during match play, this includes,

• Which stroke to choose.

• Which grip type to use.

• The exact spot to hit to.

When a parent suggests out instructions from on/off the court, they take away the learning opportunity from the player.

When parents are constantly feeding players this "do this, do that" information, players can quickly start to rely on their input instead of thinking for themselves. Instead, parents should sit back and allow their child to make decisions. Which involves allowing your child to make mistakes. Each player must know that they're not going to be criticized when their decisions do result in mistakes.

If a player knows they're going to be yelled at each time they commit a turnover or miss a shot, their anxiety levels will shoot through the roof. There's no way they'll be able to make decisions and then learn from their mistakes in that environment.

3. Takes Authority and Respect Away From the Coach

If a coach is willing to volunteer their time to coach your son or daughter, please let them do the coaching. A parent screaming out instructions just makes their role even more difficult than it already is.

If you absolutely need to voice your opinion all game, wait a few months and put your hand up to coach your daughter/son next tournament season. But most aren't willing to do that.

They'd rather voice their opinion without the extra responsibilities of:

• Arriving 15 minutes before practice to set up.

• Taking the time to plan out each practice session.

• Struggling to teach players to their strength and weakness.

Coaching young players takes up a large chunk of time and to do it well is much harder than it looks. Appreciate and respect the coaches those who are willing to devote their time and effort.

When coaching on/off court, some parents do more than scream out instructions to the players. There are many who decide to shout at referees, too. Here are a few of the main negatives to doing this:

a. You're teaching your child to make excuses

When your child notices you complaining to the referee, they'll feel like they're allowed to do the same thing. Instead, teach them to immediately move onto the next play.

b. The referees will get worse

With a bunch of angry adults shouting in their direction, you can guarantee that the game's officiating will quickly deteriorate. Parents (and coaches) must understand that a referee will never change their decision just because you angrily let them know your opinion. Lead by example and keep your thoughts on the officiating inside your head.

Parents should be Supporting New Coaches

Have you ever heard a parent say this: "My son's coach has no idea what he's doing!"

Just like players, many coaches are still learning. In fact, tens of thousands of parents with very little badminton background step up each season to coach simply because there's no one else to do it.

Stop expecting your son's under 10's coach to be pe​rfect. Stop sitting off the court and shaking your head and rolling your eyes. We have to do our best to support new badminton coaches as they gain experience and develop their coaching knowledge. Everyone has to start somewhere.

So, What Should Parents Do Instead?

A parent's role as a spectator is very simple...Watch the game and encourage the players on the court.

Watching the game is self explanatory and doesn’t require further explanation. But Encouraging does not mean:

It means enjoying the game and occasionally clapping and cheering for the Player    . Here’s a rule of thumb to remember…. As soon as you stand out from the crowd, you’re doing something wrong.

When parents are shouting/guiding out from on/off court, they're making each player's youth sporting experience less enjoyable.

Don’t get me wrong... 99% of youth sports parents are fantastic. But, Parents who continually confuse their child with unnecessary coaching advice, embarrass their child with over-celebrating or complaining, and even parents who slow down their child’s badminton development by making them nervous about committing a mistake.

To improve the young badminton experience for players everywhere, Parents need to take a step back and do a better job of understanding their role.

Verdict:
Choose the better coach available to you…Choice is yours. Sit back, enjoy the game, and let the coaches do the coaching. And remember... Your kids aren’t going to be playing badminton as kid forever. 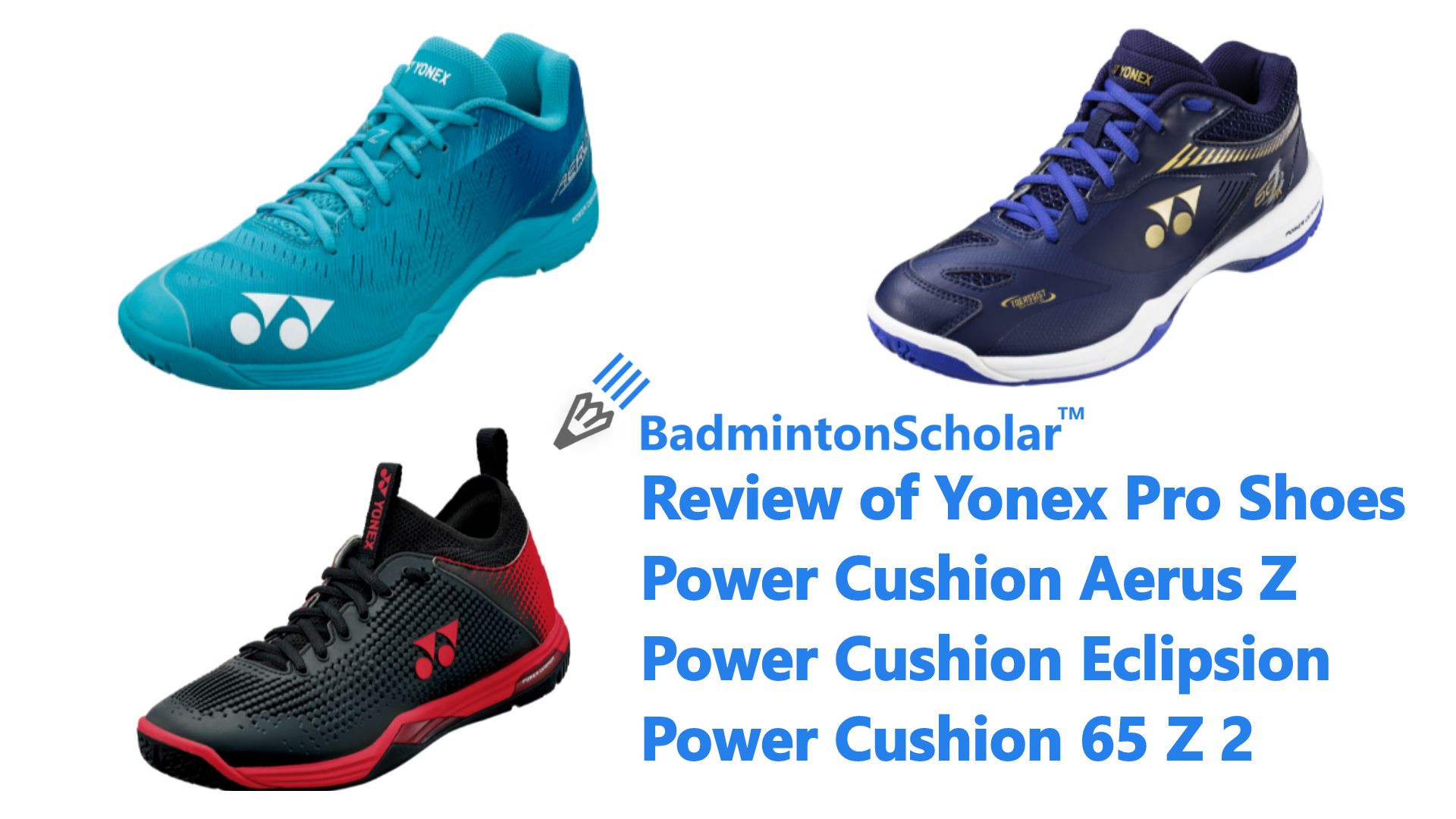 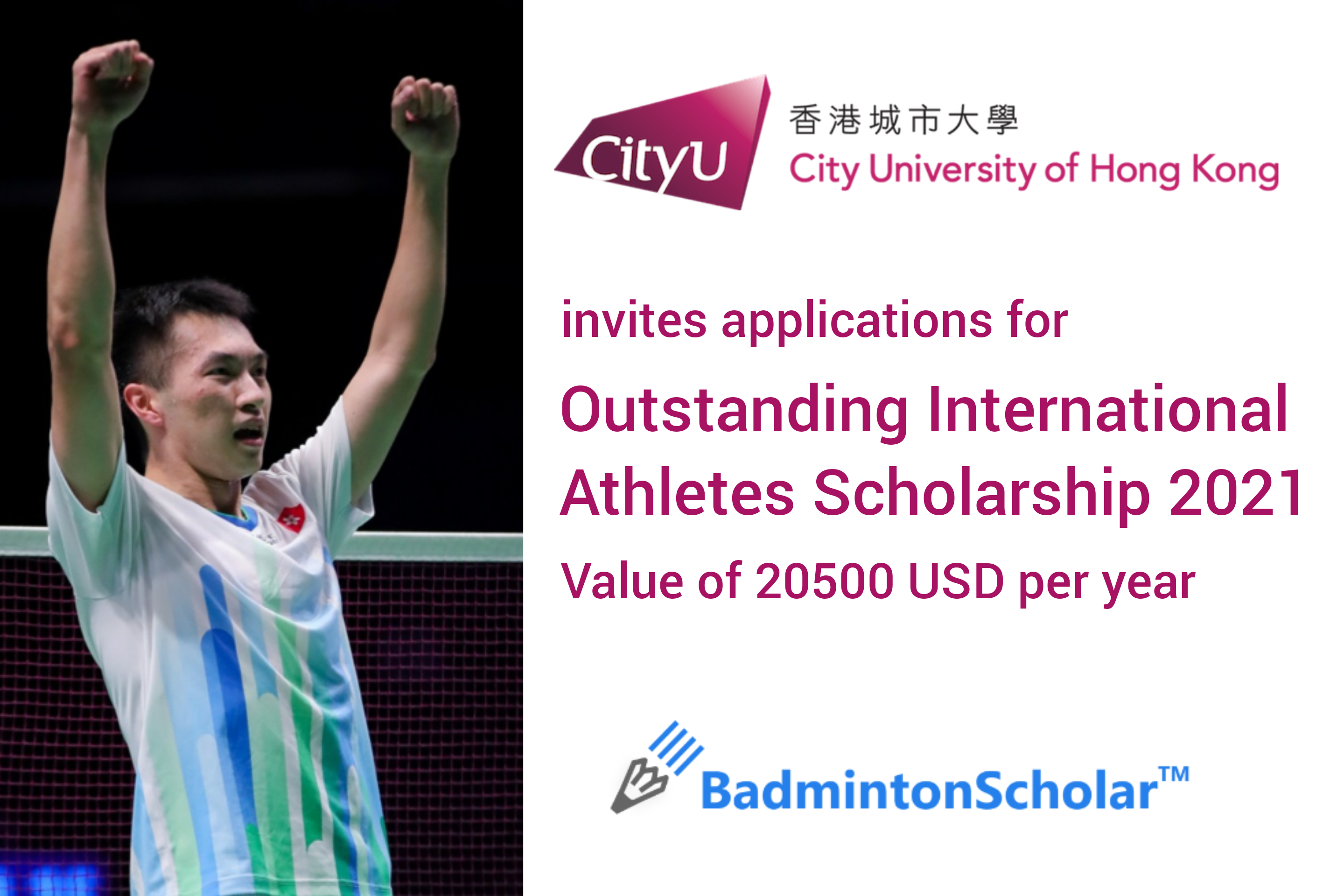 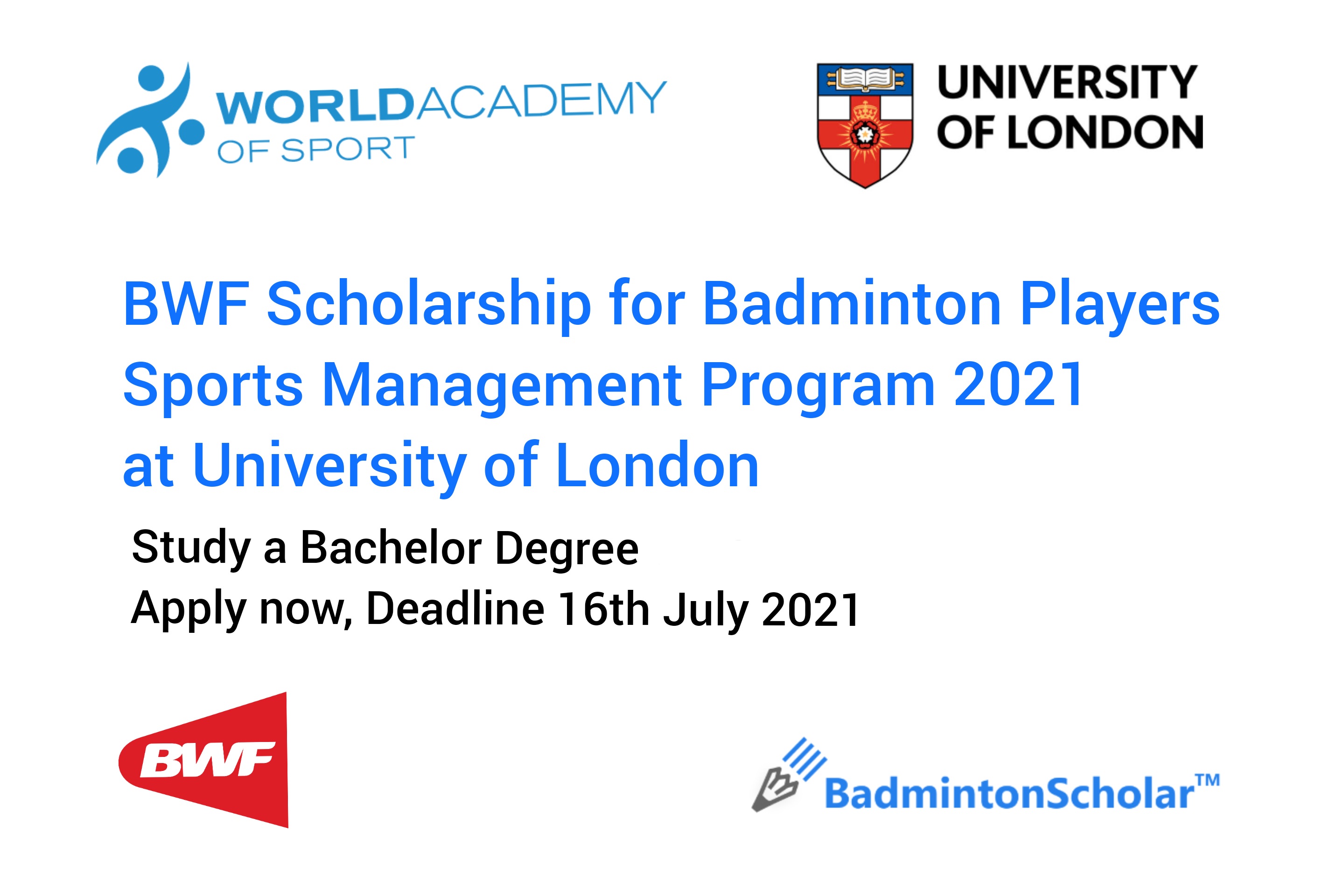