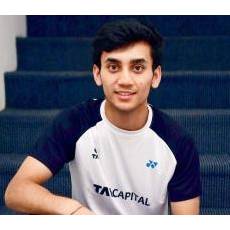 Lakshya Sen (born 16 August 2001) is an Indian badminton player. Sen, born in Almora, belongs to a badminton family. His father, D. K. Sen, is a coach in India and his brother, Chirag Sen, is also an international badminton player. Trained at the Prakash Padukone Badminton Academy, Sen has shown his talent as a badminton player at a young age, and has had a brilliant year in the junior badminton circuit in 2016. He became the number one junior singles player in BWF World Junior ranking in February, 2017. Sen also competed in the senior international level and won the men's singles title at the 2016 India International Series tournament. He emerged as the champion at the 2018 Asian Junior Championships defeating the top seeded World No. 1 Kunlavut Vitidsarn in the final.

What I Love About You and Our Memories: A Fill-in-the-Blank Gift for Valentines Day, Birthday, Anniversary Gifts for Husband, Wife, Boyfriend and Girlfriend (english)

My First Library: Boxset of 10 Board Books for Kids